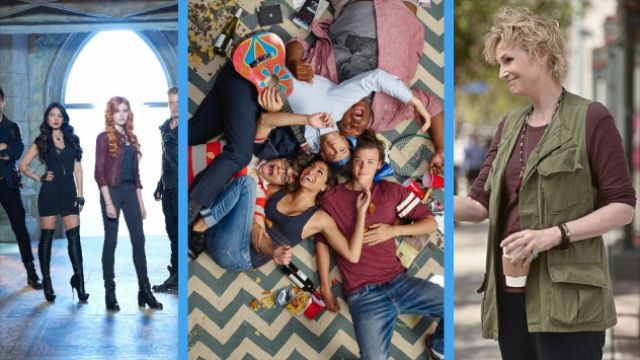 SMS
These Are The 3 New Midseason TV Shows That Aren't Worth Watching
By Katherine Biek
By Katherine Biek
February 2, 2016
"Shadowhunters," "Cooper Barrett's Guide to Surviving Life" and "Angel From Hell" are all new TV shows we suggest not tuning in for.
SHOW TRANSCRIPT

Full disclosure: All we've been doing recently is watching TV — a lot of TV — that's what happens when the midseason shows premiere. But we've been doing all this TV watching for you, to let you know which three new TV shows you don't need to bother watching. Like, don't even bother streaming them — they're just not worth it.

First is "Shadowhunters" on Freeform.

Based on a series of teen fantasy books by Cassandra Clare, the show is about a teenager named Clary who discovers she's actually a human-angel hybrid after her mother is kidnapped. She teams up with a group of Shadowhunters to fight demons and save her mom. (Video via Freeform / "Shadowhunters")

Next is Fox's "Cooper Barrett's Guide to Surviving Life."

It's about a group of friends trying to figure out the next stages of their lives after graduating college. (Video via Fox / "Cooper Barrett's Guide to Surviving Life")

Lynch plays Amy, an alcohol-drinking guardian angel whose job is to give guidance to a woman named Allison, played by Maggie Lawson. (Video via CBS / "Angel From Hell")