'There's Something Going On': How Donald Trump Mainstreams Conspiracy 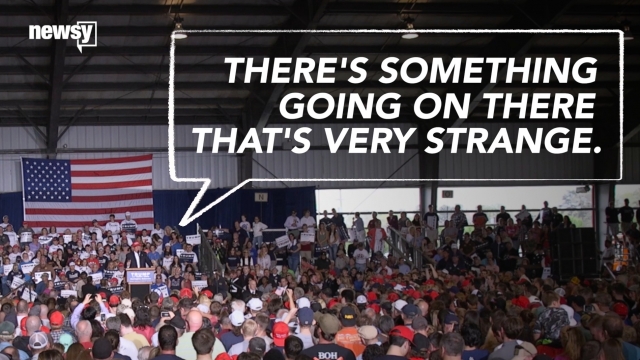 SMS
'There's Something Going On': How Donald Trump Mainstreams Conspiracy
By Zach Toombs
By Zach Toombs
May 23, 2016
From JFK to the birther conspiracy, Donald Trump pushes unfounded theories into the forefront of political thought in America.
SHOW TRANSCRIPT

"Well, I think a lot of Americans are really concerned about President Obama and his ties to Muslim and his belief in Muslim," one supporter of Donald Trump told us.

"We have people that don't have a clue," Trump said in Delaware. "I mean, a guy like Obama. I mean, think of it: 'radical Islamic terrorism.' He refuses to mention the words. There's something that's going on there that's very strange. He'll never ever acknowledge it."

"I think he's a radical Islamist himself," another Trump supporter said. "He's a Muslim. I mean, it's simple."

You see all these polls and surveys asking people if they think President Obama is a "secret Muslim." And when Donald Trump speaks like he did here, today in Delaware, he really leaves that open to interpretation.

"'There's something going on there.' What did that mean to you?" Newsy's Zach Toombs asked.

"I feel like Obama's their buddy," a Trump supporter told us. "He's rubbing — he's too friendly with them."

Trump does this a lot. As absurd as some of the things he actually says are, he often hints at things that are totally unfounded but that play into low-information conspiracy theories.

"His father was with Lee Harvey Oswald," Trump said in reference to Ted Cruz's father after the National Enquirer reported the conspiracy.

"There's something going on with him that we don't know about," Trump said of the president.

"How did you interpret that? What did that mean to you?" Toombs asked.

"I think that President Obama does not like the American people," a Trump supporter responded.

"I think he does have a hidden agenda. To get as many of them here as he can so that the Democrats will never lose an election."

"And he said that the fact that the president doesn't use those words, there's something going on there. How did you interpret that?" Toombs asked another.