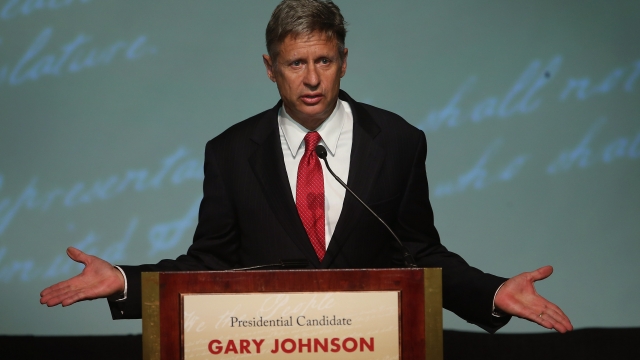 SMS
There's A Lot In The Way Of A Third Party Winning The White House
By Kate Grumke
By Kate Grumke
May 30, 2016
Third-party candidates have trouble breaking through in terms of funding, organization and even just getting on the ballot.
SHOW TRANSCRIPT

The U.S. wasn't always so deeply divided into two parties. These dots show various parties — the bigger ones with more seats in the House. Through the 1800s and and even the first half of the 20th century, you can see a lot of little dots here — third parties. But in the time since, pretty much all the seats have been taken up by Democrats and Republicans.

But this year there's been a lot of hype around the Libertarian party and its candidate Gary Johnson, former governor of New Mexico.

"We didn't arrive here by mistake. People really have an appetite for something different," Libertarian presidential candidate Gary Johnson said.

The Democrats' and Republicans' two front-runners have historically low favorability ratings, while Johnson has recently been polling around 10 percent. And a larger percentage of Americans than usual have said they would like to see a third-party candidacy.

That has a lot of Libertarians pretty excited.

"All we've got to do is just not screw this up," said Libertarian presidential hopeful Austin Petersen.

But the deck is pretty stacked against third-party candidates.

Take a look at the campaigns' finances. Donald Trump, Hillary Clinton and Bernie Sanders have raised — and spent — millions of dollars. Gary Johnson's net contributions on his FEC filing from the last period were just $293,125. He has $14,924 on hand. Compare that to Trump's $2.4 million, Clinton's $30.2 million and Sanders' $5.8 million, and you can see why most people are counting him out.

And third parties don't have the nationwide organizing infrastructure the Democrats and Republicans have. Just getting on the ballot can be a challenge.

"And it costs us so much money to do that that all of our resources are spent getting on the ballot, depriving us of the ability to use that same money to get our message out," said Geoff Neale, former Libertarian chairman.

Even if Johnson or another third-party candidate does do well, throughout history, even successful third-party runs just took votes from one of the main parties.

In 1912 when Teddy Roosevelt created the Bull Moose Party, he ended up getting about 30 percent, which ended up splitting the Republican vote and pushing Democrat Woodrow Wilson to win the election. And Ross Perot's independent run in 1992 is often pointed to as a reason George H.W. Bush wasn't re-elected.

Libertarians understand their chances are low, but anything that gets their party and their ideas more exposure is a win in their books.

This video includes clips from U.S. National Archives and CBS News, and images from Getty Images.