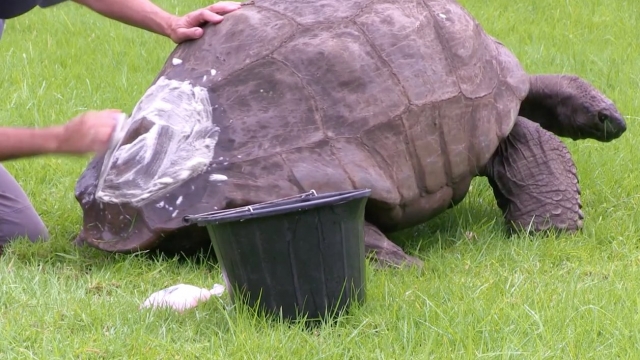 SMS
The World's Oldest Land Animal Gets His First Bath After 184 Years
By Ryan Biek
By Ryan Biek
March 24, 2016
Jonathan the giant tortoise is considered a national treasure on St. Helena Island, which lies in the Atlantic Ocean.
SHOW TRANSCRIPT

The world's oldest land animal just got his first bath ever, and it only took an estimated 184 years.

Jonathan the Giant Tortoise is considered a national treasure on St. Helena Island in the Atlantic.

Surgical soap and soft brushes were reportedly used to protect his shell.

Dr. Joe Hollins, the vet who gave Jonathan his bath, said it was "purely for aesthetic reasons." But after the cleaning, Hollins noticed that the rings on Jonathan's shell, which would usually tell his age, had faded away.

Giant tortoises are usually only expected to live 150 years. After switching Jonathan to a more nutritious diet last year, St. Helena hopes he'll have plenty of years ahead of him.