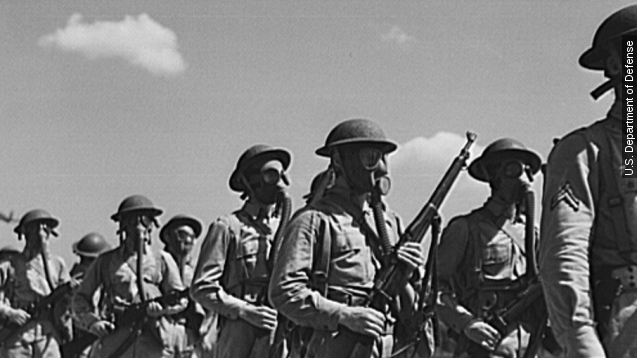 SMS
The US Still Can't Find The Troops It Tested Mustard Gas On
By Jake Godin
By Jake Godin
November 11, 2015
Thousands of soldiers who underwent the U.S. government's mustard gas experiments are still unaccounted for.
SHOW TRANSCRIPT

The U.S. declassified the experiments in the 1990s.

But what isn't known are the names of the 60,000 soldiers who endured the tests.

"Briefly, on a separate subject — and I just want to bring this up, and I won't go into the details here, but I am desperately trying to get at helping the veterans that were subject to mustard gas experiments," Missouri Sen. Claire McCaskill said on C-SPAN.

The goal of the tests was to give the U.S. troops an edge over their Axis enemies if American soldiers encountered the gas attacks. They never did.

Although the Department of Veterans Affairs promised in the '90s to find and compensate about 4,000 of the worst affected men, a recent NPR investigation found that the VA wasn't able to follow through.

The reason, the VA told NPR, was because it couldn't locate the men. So NPR created its own database, which so far includes more than 3,900 individuals.

Mustard gas has debilitating effects in both the short and long run. If you have information about veterans who have been exposed to mustard gas, email NPR at cdickerson@npr.org.

This video includes images from the U.S. Department of Defense.