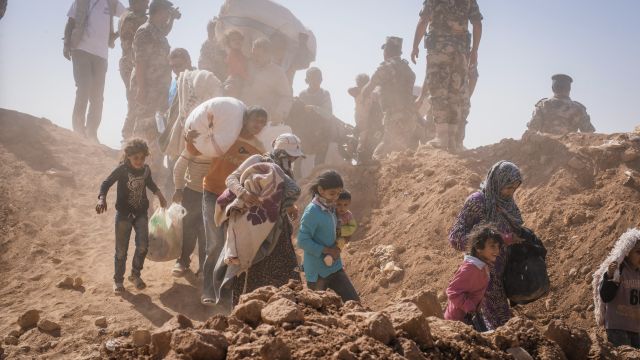 SMS
The US Hasn't Taken In Many Syrian Refugees — Here Are The Numbers
By Jake Godin
By Jake Godin
August 17, 2016
Compared to the total U.S. population, only a very small fraction of Syrian refugees have come into the country.
SHOW TRANSCRIPT

The U.S. actually isn't taking in many Syrian refugees.

Think of it like this: The U.S. has about 320 million people.

About half are children. And according to the State Department, only 2 percent are single men of "combat age."

"Syrian refugees are being relocated in large numbers to New Mexico," Donald Trump said at a rally in Albuquerque.

New Mexico actually only took in 18 Syrian refugees. And that's since 2011.

An Oxfam study says the U.S. would need to take in about 163,000 Syrians for its share.

Canada, for example, has taken in almost 30,000 Syrians. Canada's population is about a tenth of America's.

All refugees heading to the U.S. will be screened.

That includes passing checks from the State Department, Department of Homeland Security, National Counterterrorism Center, FBI and Department of Health and Human Services.

The process can take anywhere from 18 to 24 months.