The Supreme Court's Ruling On Abortion Could Extend Beyond Texas 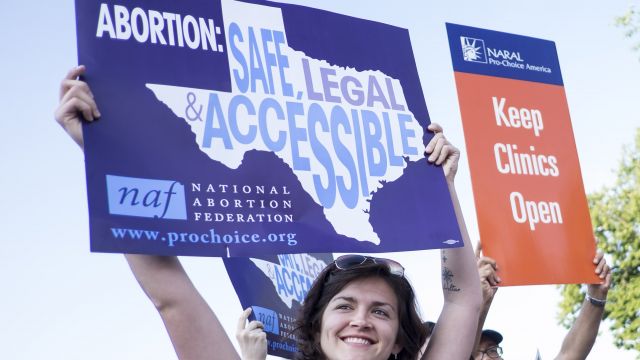 Monday's Supreme Court decision gave pro-abortion advocates in Texas a major victory, and it will likely have a huge impact across the country.

The court ruled 5-3 that it’s too much of a burden to force doctors to get hospital admitting privileges or hold clinics to similar standards as surgical centers before they can perform abortions.

In his opinion, Justice Stephen Breyer said: "There was no significant health-related problem that the new law helped to cure. ... The admitting privileges requirement, provides few, if any, health benefits for women."

About half of the abortion clinics in Texas shut down since the new requirements went into effect, but it’s not the only state with laws like that on the books.

According to the Guttmacher Institute, 23 other states have laws forcing abortion providers to bring their facilities up to the standard of surgical centers. Fixing a building to meet those requirements can cost more than $1 million.

Now, a lot of those rules could be called into question. Abortion advocates argued many regulations on abortion providers were more about hindering abortion than keeping women safe. Now, each state may have to prove that's not the case.

Each state’s restrictions would have to be tried individually, but the Center for Reproductive Rights says the Supreme Court set a clear precedent for "what the standard should be in these types of cases. The benefits of restriction have to outweigh the burden."

This video includes a clip from CNN and images from Getty Images. Music provided courtesy of APM Music.