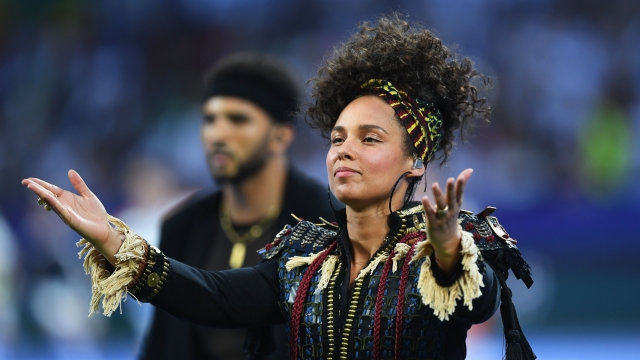 Actually, Alicia Keys and I do have something in common.

We're both ditching makeup! Not such a big deal for me, but the singer is being praised for why she decided to go without.

Keys opened up in Lenny Letter about dealing with beauty standards for women within entertainment and how the need to be "perfect" manifested into something unhealthy.

She wrote: "Every time I left the house, I would be worried if I didn't put on makeup: What if someone wanted a picture?? What if they POSTED it???"

But according to Keys, the first photo shoot for her new album prompted her to go uncovered, in a way. She said a photographer wanted to shoot the singer right out of the gym, hair wrapped, chillin' with no makeup on.

Keys said, "I swear it is the strongest, most empowered, most free, and most honestly beautiful that I have ever felt."

She expressed a similar sentiment in an interview with Fault magazine, saying, "Once I can teach myself that there is no perfect and that I am meant to have my FAULTS, that is when I become beautiful."

These recent features aren't the first time Keys has publicly talked about her appearance and standards for women.

She was featured as a spokesperson for Proactiv Solution, opening up about her struggles with acne.

For Keys' recent #NoMakeup movement, she says, "I hope to God it's a revolution."

If Swizz Beatz' Instagram is any indication, we'll be seeing much more from the makeup-less Ms. Keys. The singer's husband posted this picture from a Vanity Fair shoot, saying, well, you see the reaction.

This video includes images from Getty Images and clips from Sony Music Entertainment, RCA and Proactiv.