Have You Heard The Spooky Legend Behind The Jack-O'-Lantern? 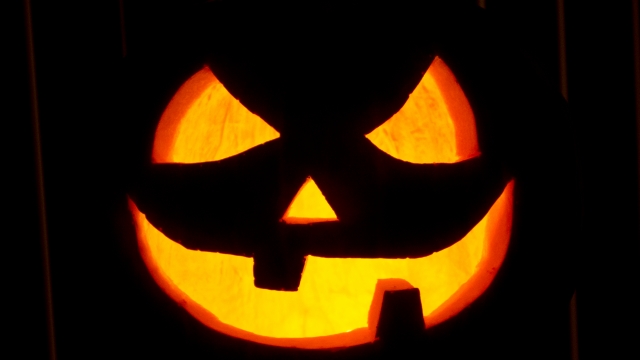 SMS
Have You Heard The Spooky Legend Behind The Jack-O'-Lantern?
By Ethan Weston
By Ethan Weston
October 30, 2016
Supposedly, a man known as "Stingy Jack" tricked the devil and lived to regret it.
SHOW TRANSCRIPT

Jack-o'-lanterns are a ubiquitous part of Halloween, but have you ever wondered where the tradition comes from?

The legend supposedly begins in Ireland with a cheapskate named "Stingy Jack."

As his name suggests, Jack was greedy — but he was also clever. And according to the legend, he tricked the devil more than once into promising not to claim his soul when he died.

It goes like this: The penny-pinching Jack went drinking with the devil but didn't want to pay for the drinks, so he convinced the devil to turn into a coin.

Instead of paying for the drinks, Jack pocketed the coin and kept it next to a cross, trapping the devil inside. Once the devil was freed, Jack made the lord of the underworld promise never to seek revenge and not to collect his soul when he died.

SEE MORE: Food Allergies Got You Down This Halloween? Find The Teal Pumpkin

Later on, Jack managed to trick the devil again, this time trapping him in a fruit tree. Again, he made the devil promise not to seek revenge.

But the devil had the last laugh. When Jack croaked, God wouldn't let him into heaven, and the devil — true to his word — wouldn't let Jack into hell.

Instead, Jack was forced to wander the Earth with a single piece of burning coal in a carved-out turnip — not a pumpkin — which he used as a lantern. And he's been wandering ever since.

That's the story at least. And it's why in the British Isles, people warded off evil spirits with jack-o'-lanterns, but they were originally carved out of turnips, like this one.

When waves of Irish immigrated to the Americas in the mid 1800s, they brought the story with them, but traded turnips for pumpkins, which were easier to carve.

There's also a more down-to-earth theory about the jack-o'-lantern's origins: They were used for nighttime pranks.

In 19th-century America, kids would carve creepy faces into pumpkins, put a candle in the body and use them to scare unsuspecting people at night.