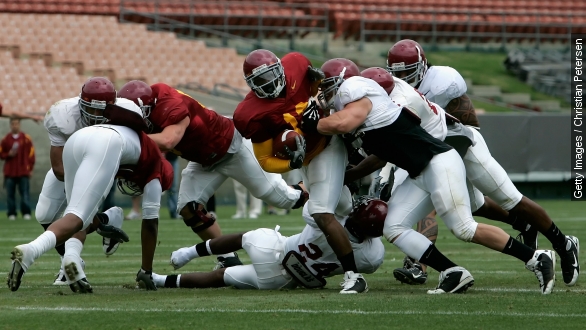 SMS
The Part Of Football's Concussion Problem Fans Never Witness
By Jay Strubberg
By Jay Strubberg
May 4, 2015
Concussions are a known issue at all levels of football, and a new study shows many of those injuries are suffered in practice, not just in games.
SHOW TRANSCRIPT

Concussions are a known problem at all levels of football, and for high school and college players, the majority of those injuries occur on the practice field, according to a new study.

Research published in JAMA Pediatrics says 58 percent of concussions suffered at the high school and college level occurred during practice, compared to 42 percent during games. (Video via WEWS)

And while the numbers were closer to 50/50 for youth leagues, the study says, "Football practices were a major source of concussion at all three levels of competition."

They found that for 2013, 3 percent of youth players, 5 percent of high school players and 6 percent of college players were at risk of suffering a concussion. This is reportedly the first study to compare those three groups. (Video via YouTube / Amanda Wood)

Football, of course, is wildly popular in the U.S. at any level. There are about 3 million youth football players in the country, 1.1 million in high school and 100,000 who play at the collegiate level. (Video via WEWS)

And at all levels, there have been attempts to reduce the number of concussions.

For instance, according to NPR, the University of New Hampshire has practiced without helmets.

"The biggest thing that we talk about is keeping the eyes and head up. And then you want to tackle chest to chest, not leading with your helmet or your face," said Wildcats head coach Sean McDonnell.

New Hampshire is not alone. USA Football, which helped fund the new study, has partnered with the NFL on the "Heads Up" football program, which gives youth players training on safer playing techniques.