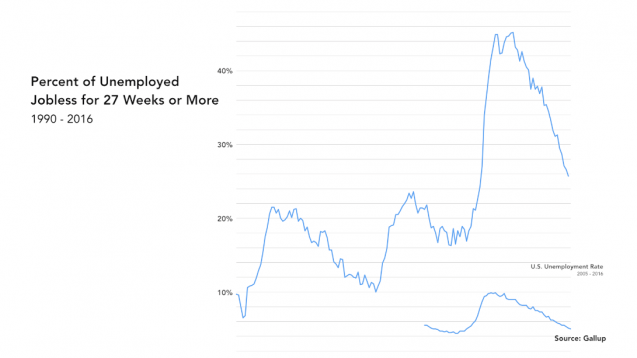 SMS
The 1 Big Jobs Statistic Obama Didn't Mention
By Zach Toombs
By Zach Toombs
January 12, 2016
America has made gains in most economic metrics to recover from the financial crash. But the percentage of long-term unemployed workers remains high.
SHOW TRANSCRIPT

The president paints a rosy economic picture, and in many ways, he's right to do that. The stock market is up and unemployment is down — at its lowest level since before the financial crash. But there's another important metric that's often overlooked.

That's long-term unemployment. The percentage of the unemployed who've been jobless for 27 weeks or longer is way up. That's bad both for those unemployed workers and for the economy as a whole, but it's rarely talked about.