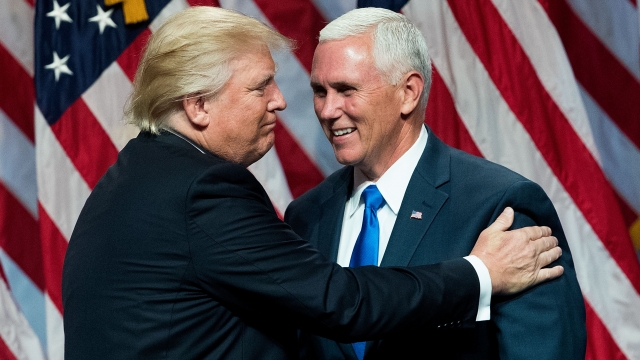 The Trump campaign has replaced its Trump-Pence ticket logo with something that's a little less ... suggestive.

One graphic designer told Wired, "It's not subtle at all. It's a 'T' penetrating a 'P.' There's no way around it. And we're human. We're inclined to find humor in things. So we see a sex act."

To be fair, the coupled letters in the earlier logo do imply an interest in unity, and that idea — specifically, party unity — seems to have been important to Trump in making the pick.

SEE MORE: Donald Trump Had A Lot To Say Before Introducing His Running Mate

"One of the big reasons that I chose Mike, and one of the reasons is party unity, I have to be honest. So many people have said party unity, because I'm an outsider," Trump said at a rally.

As Time points out, the decision signals "Trump going with safety over flash and guidance over gut instinct."

Trump aides told Fox News there might be multiple campaign logos in the future, but the "TP" logo is a goner. Maybe the more straightforward logo will help keep our minds out of the gutter.

This video includes images from Getty Images and clips from C-SPAN and Donald J. Trump for President Inc.