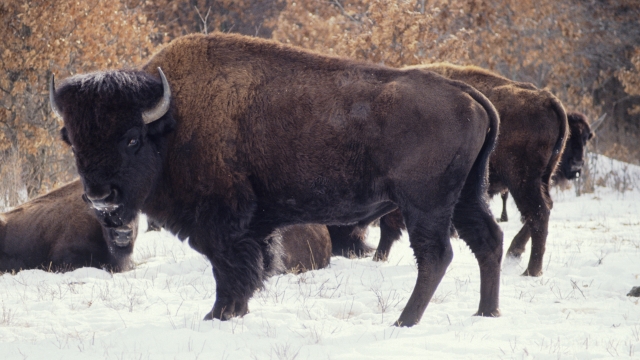 SMS
The Largest Mammal In North America Was Just Named A National Symbol
By Katherine Biek
By Katherine Biek
May 10, 2016
Over 230 years after the bald eagle became America's symbol, the U.S. finally has an official national mammal.
SHOW TRANSCRIPT

The American bison is now the country's national mammal, thanks to the National Bison Legacy Act, which President Barack Obama signed into law Monday.

For years, conservationists have pushed for the federal government to recognize the animal.

Bison have existed since the prehistoric age, and scientists think at least 30 million were living in North America when European settlers came over in the early 1600s.

But droughts and overhunting slashed bison populations almost to extinction.

Today, there are about 500,000 bison in the U.S., thanks to the efforts of zoologists and conservationists. Most bison live in zoos and national parks.

Besides being on the U.S. Interior Department's official seal since 1912, the National Bison Legacy Act noted the bison is on two state flags and is the mascot for several sports teams.

This new designation isn't pushing out the bald eagle, which has been a national symbol since it was put on the U.S. seal in 1782.

In fact, Smithsonian Magazine reports the title given to the bison is just an honorary one and the animals can still be raised and sold for meat.

This video includes clips from Wildlife Conservation Society, CBS and Brookfield Zoo and images from Getty Images and Larry Smith / CC BY 2.0.