The Lakers Should Retire Kobe Bryant's No. 24 Jersey, No Question 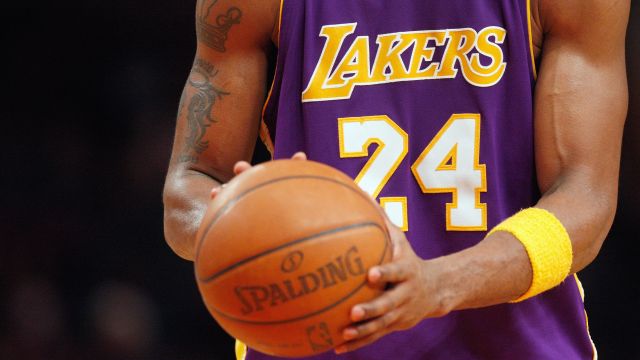 SMS
The Lakers Should Retire Kobe Bryant's No. 24 Jersey, No Question
By Jamal Andress
By Jamal Andress
April 13, 2016
After Wednesday's game at the Staples Center, only one of Bryant's jerseys, No. 24, should hang in the rafters.
SHOW TRANSCRIPT

With Kobe Bryant finally hanging it up, many have asked which one of his jersey numbers should ascend to its rightful place in the Staples Center ceiling.

Both numbers will be on the floor for Wednesday's historic game, but only one should hang in the rafters. Here's why:

Kobe Bryant spent 10 seasons in both jerseys. His stats for the two time periods are nearly identical racking up better than 16,000 points, 3,100 assists and 3,400 rebounds in both eras.

He's got five championships: one, a three-peat, and the other, a back-to-back run. Obviously though, the three championships come with a caveat — a 7-foot, 300-pound asterisk.

"Your last game at the staples, can you give us 50 that night?" Shaquille O'Neal asks Kobe Bryant.

Much has been made about what could've been if Shaq and Kobe both stayed in LA. After all, four trips to the finals in five years is about as good as it gets.

But that's what makes Bryant's time as No. 24 so important. The milestones in his career while wearing that number are undoubtedly his and his alone.

While Bryant was a three-time champion as No. 8, he was a Finals MVP twice as No. 24.

Bryant managed to drop 81 points in one game against the Raptors (2nd most ever) in No. 8, but he won his only MVP award wearing No. 24.

"Was 2010 the most important championship for you?" a reporter asks off-camera.

"Yep, no question about it," Bryant responds.

Kobe Bryant became the legend he is today in the second half of his career, and he's even said as much. He told a Lakers.com reporter that "he's evolved more into himself in 24."

As for what the Lakers organization will decide, no one knows, but general manager Mitch Kupchak says the team is considering both, which would make Bryant the first player in NBA history to get two numbers from the same team hung in the rafters.