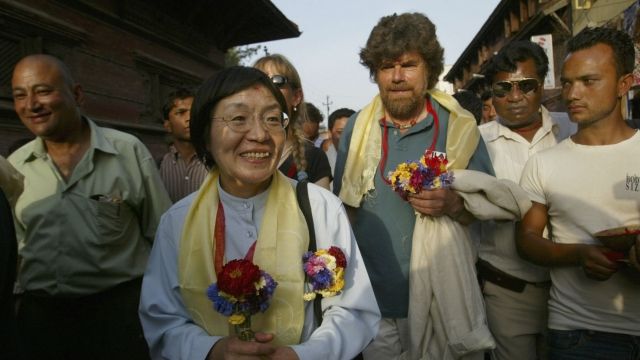 The first woman to climb Mount Everest has died.

Junko Tabei passed away from cancer Thursday in a hospital near Tokyo. The mountaineer was 77 years old.

Tabei was a nearly lifelong climber — according to Japanese news outlet NHK, she began climbing after graduating from university.

Before she took on the world's highest mountain, Tabei founded the Ladies Climbing Club in 1969. Then in 1975, she and a group of women set their sights on Mount Everest.

Everest is the world's tallest mountain, reaching a height of a little more than 29,000 feet.

But Tabei didn't stop there. By 1992, she'd conquered the Seven Summits.

The Seven Summits are the highest peaks on each continent — one the most notable being Mount Kilimanjaro in Africa — and Tabei conquered them all.

But Tabei was known for more than her mountaineering. She defied stereotypes and became an image for independence.

When Tabei climbed Everest, it was a widely held belief that a woman's place was in the home. She told The Japan Times in 2012 she had no doubt about climbing that mountain "no matter what other people said."

Tabei climbed peaks in more than 70 countries throughout her life. Her last climb was Mount Fuji with a group of high school students in 2011.