The Downside Of Low Gas Prices: More Traffic Than Ever 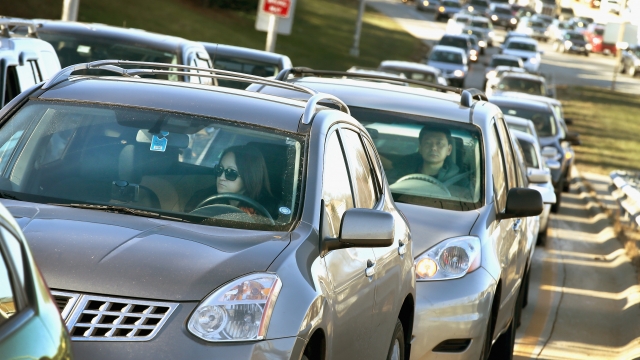 SMS
The Downside Of Low Gas Prices: More Traffic Than Ever
By Ben Lawson
By Ben Lawson
February 24, 2016
Thanks to a rebounding economy and rock-bottom gas prices, there were more drivers on the road than ever last year.
SHOW TRANSCRIPT

It's not your imagination: Traffic in the U.S. is actually getting worse. Americans drove more miles last year than any other year on record.

The U.S. Department of Transportation says Americans drove nearly 3.15 trillion miles last year. That's about the same distance as 337 round trips from Earth to Pluto.

The previous record was 3.003 trillion miles in 2007, before the economic recession and high gas prices.

The traffic increase comes at the same time as a significant drop in gas prices. The current average gas price in the U.S. is $1.71 per gallon. A year ago it was $2.31 per gallon and was often much higher in recent years.

A transportation expert told NPR that job growth likely plays a part as well, along with some people dealing with much longer commutes.

And so all this means more congestion on the road. The Texas A&M Travel Institute found that rush-hour travelers spent an extra 42 hours on the road last year because of travel delays. Now, that is depressing.