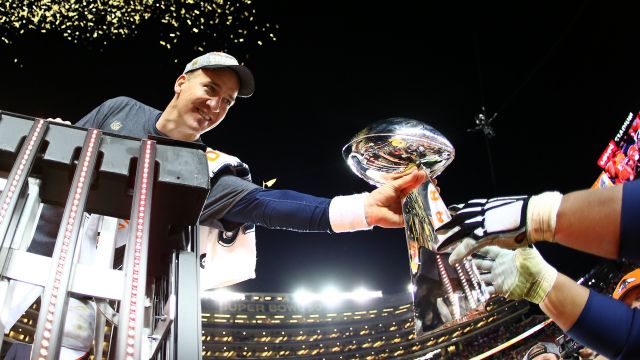 The Denver Broncos are Super Bowl 50 champions, knocking off the favored Carolina Panthers 24-10.

The Broncos won the game behind a stout defensive performance, with a fourth-quarter rushing touchdown from C.J. Anderson sealing the deal.

The Broncos were heavy underdogs leading up to the big game, so much so that Vegas oddsmakers had to push back the game's point spread in the days leading up to kickoff. (Video via Nationwide Insurance)

But maybe we shouldn't be so surprised. The Broncos are now the fourth underdog in the last five Super Bowls to hoist the Lombardi Trophy.

It's a disappointing end to a stellar season for Cam Newton and the Panthers. Newton won league MVP, brought "dabbing" to a mainstream public and led the Panthers to a 15-1 regular season record.

For Broncos quarterback Peyton Manning, the win is an addition to an already historic legacy. It gives Manning his second Super Bowl ring after triumphing with the Colts in Super Bowl XLI.