These Haunted Destinations Will Scare The Pants Off Of You 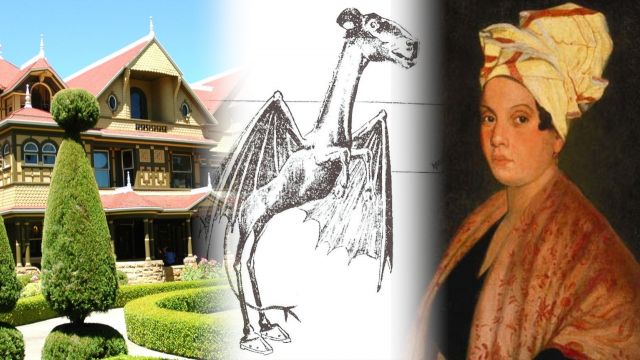 SMS
These Haunted Destinations Will Scare The Pants Off Of You
By Katherine Biek
By Katherine Biek
October 4, 2016
From a New Orleans cemetery to a California mansion with staircases to nowhere, haunted places are all over the U.S.
SHOW TRANSCRIPT

October is the perfect time of year to visit a haunted house. And, it turns out, you can find spooky stories everywhere.

First up: the Saint Louis Cemetery No. 1 in New Orleans.

This above-ground cemetery has been around for centuries, and tourists wandering around the tombs have spotted many ghostly figures.

SEE MORE: A Good Halloween Costume Is Really All About Comfort

The most famous of these ghosts is the voodoo queen of New Orleans herself, Marie Laveau. She died in 1881, and some cemetery visitors believe if you scribble three X's on her mausoleum, she'll grant your wish.

Next on the list is The Stanley Hotel in Estes Park, Colorado.

The hotel opened in 1909, but the haunted spot gained notoriety in the late '70s after author Stephen King drew inspiration from it for his bestselling novel "The Shining."

The couple who opened the hotel, F.O. and Flora Stanley, are said to haunt it today. She's been heard playing the hotel's piano at night, and he's been spotted hovering behind the reception desk.

Now, we travel to the RMS Queen Mary, docked in Long Beach, California.

The ocean liner was used in World War II and was eventually turned into a hotel. Almost 50 people have reportedly died on board. Many still haunt the Queen Mary, including a sailor who was killed in the engine room and a young girl who drowned in the pool.

Now onto the Pine Barrens in New Jersey.

Also known as the Pinelands, this forested area is said to be home to the Jersey Devil, a legendary beast with a goat's head, wings and a hooked tail.

Next is the Ohio State Reformatory in Mansfield, Ohio.

It was home to more than 155,000 juvenile and young adult offenders before shutting down in 1990. Visitors touring the reformatory have reportedly been physically attacked by spirits of the inmates.

After the death of her family, Sarah Winchester consulted a medium who told her she'd die if she didn't build a large house to hold the spirits haunting her.

Builders worked continuously on the house for decades until Winchester's death. As many as 600 rooms were built, though a massive restoration left only 160 today. The spirits apparently still remain.