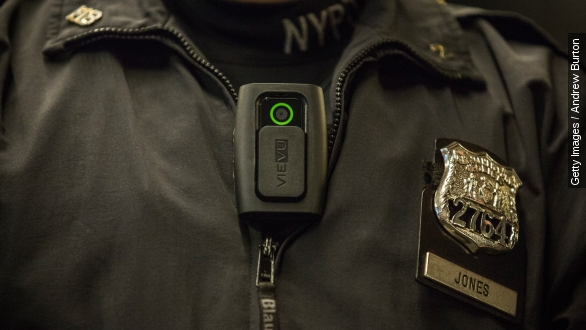 SMS
The Cost Of Police Body Cameras
By Cliff Judy
By Cliff Judy
April 11, 2015
Their presence has captured heroism and their absence has raised questions, but what are the true costs of buying and using police body cameras?
SHOW TRANSCRIPT

How much do police body cameras cost?

Their presence has captured heroism from officers rescuing a baby from icy waters in Utah to carrying a child from a burning building in Georgia. (Video via Spanish Fork Police Department & Euronews / City of Griffin Police Department)

Their absence has led to questions. Like what was said in the moments before South Carolina police officer Michael Slager shot and killed Walter Scott earlier this month. Or what happened at all when Ferguson officer Darren Wilson shot unarmed teen Michael Brown last August. (Video via The New York Times)

Police body-worn cameras are hailed by law enforcement critics as a solution for brutality and by many police officers themselves as a tool to prove the vast majority of men and women wearing badges do so professionally, and at times valiantly. But how much do they cost?

After all, a 2013 study conducted by the Police Executive Research Forum — or PERF — and supported by the Justice Department found that of the departments surveyed without body cameras, 39 percent cited cost as the primary reason.

One company VieVU advertises its police body cameras cost $199, plus $55 a month per camera for data storage. For a police department wanting 100 cameras, that comes out to about $86,000 in startup costs in the first year.

But that appears to be on the on the cheap side and only the beginning of costs. PERF found most of the police departments with body cameras reported buying them at $800-$1,200 each. (Video via RT)

Data storage takes up the bulk of police expenses. Departments have to decide a policy for how often their officers turn on the cameras, how long videos are kept and do they pay a third party provider to store the data? Or do they keep those operations in-house — often the more costly option because it requires purchasing more equipment and hiring additional people to administer the program and provide technical backup.

One police chief told the PERF study data storage costs "can be crippling."

But certainly far less crippling than other law enforcement costs like fleets of police vehicles, which cost tens of thousands of dollars to purchase before paying for maintenance. And those are tools few, if any, police chiefs would argue their department could do without. (Video via General Motors)

Body camera manufacturers and proponents also point out the cameras can help avoid wasted expenses if a conviction is thrown out or a lawsuit is filed because of alleged police misconduct. (Video via Pro-Vision)

President Obama has proposed $75 million in funding over three years to help purchase 50,000 body cameras. The federal government would basically provide local police departments with a 50 percent match to buy the cameras and store data. (Video via WOOD)

And while startup funds are great, many police officials could argue it's locking them into a much larger commitment. This is a piece of equipment those officials probably can't cut from future budgets without enormous outrage from the community.

It's that outrage and incidents the cameras could prevent that proponents say justify virtually any cost, though the realities of budgets, training and maintenance will likely keep these tools away from many officers.