The CDC Says Ads Are Encouraging Teens To Smoke E-Cigarettes 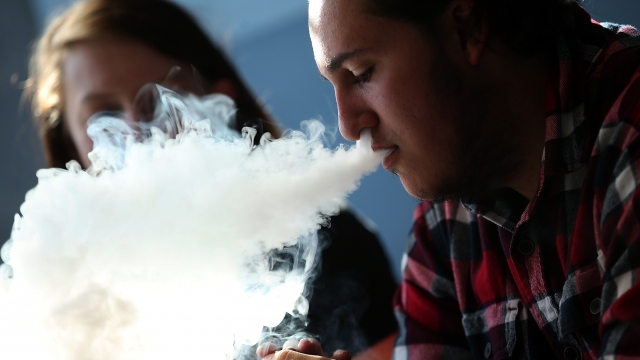 Electronic cigarette use among teens has risen dramatically in the past four years, and one study says e-cigarette ads could be to blame.

The Centers for Disease Control and Prevention reports teens who frequently see the ads are three times more likely to have used e-cigarettes. More than 18 million youths were exposed to such ads in 2014.

A separate CDC report says last year 16 percent of high school students said they'd used e-cigarettes within the previous 30 days — a huge jump from 1.5 percent in 2011. It's almost double the number of estimated cigarette users. Middle-school users were at about 5 percent.

Legally, you have to be 18 or 19 years old to purchase e-cigarettes, but yet another study found it was easy for younger teens to buy them online with no age verification.

Overall smoking rates have stayed largely the same over the past four years. While e-cigarette and hookah use have risen, cigarette smoking has fallen among teens.

This drop in cigarette use may stem from the CDC's Tips From Former Smokers campaign, which began in 2012. The effort led to an increase in quit attempts.

Health officials are worried the progress will be reversed because of e-cigarette ads and because teens lack knowledge of what e-cigarettes actually contain. Nicotine and other chemicals are very much active in the products, so addiction is still possible.

This video includes clips from Blu, NJOY and Retro Active, and images from Getty Images.