The Case For (And Against) Voting Third Party 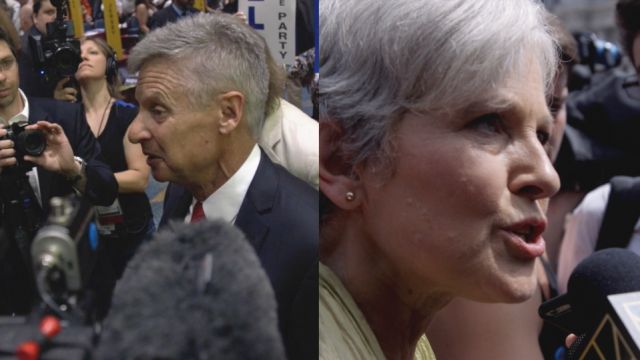 SMS
The Case For (And Against) Voting Third Party
By Kate Grumke
By Kate Grumke
August 10, 2016
Jill Stein and Gary Johnson told Newsy their arguments for voting third party, but there are also a lot of arguments against doing that.
SHOW TRANSCRIPT

We asked both Libertarian presidential nominee Gary Johnson and Green party nominee Jill Stein why they think a vote for a third-party candidate isn't just throwing a vote away.

"A wasted vote is a vote for someone you don't believe in," Johnson said.

OK, so we know what the two leading third-party advocates think about stealing votes. But is that an idealistic view? If we look at recent history, we see third-party candidates who, in the best-case scenarios, didn't get a single electoral vote but did pull support from the candidate who lined up with them the most.

In 2000, it was the Democrats turn with Ralph Nader who's accused of dragging down Al Gore's vote in Florida, pushing George W. Bush into the White House.

Another thing critics of a third-party vote want you to consider is privilege.

This tweet has been shared thousands of times: "Imagine being so white that voting for a third party just to 'prove a point' is a risk you can afford to take."

OK, so those are some of the main arguments against voting third party. But this election feels kind of different, doesn't it?

We have two of the most unpopular candidates ever. Hillary Clinton's favorability rating is around -11 points, and Donald Trump's is around -28.

Add to this, recent polling suggests about 42 percent of Americans identify as independents — more than Democrats or Republicans — and you can see why the climate for a third-party run is a little friendlier this year.

So what do you think? Do Americans have an obligation to pick between the two major parties? Tweet me at @KGrumke.