The Brother Of A Brussels Bomber Will Compete In The Olympics 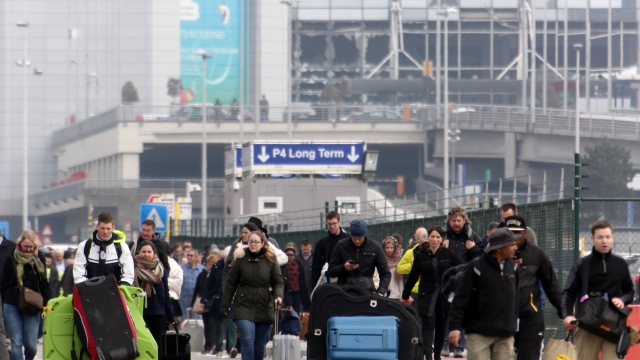 SMS
The Brother Of A Brussels Bomber Will Compete In The Olympics
By Ben Lawson
By Ben Lawson
May 21, 2016
Mourad Laachraoui is a taekwondo champion, and his brother was one of the attackers at the airport in Brussels.
SHOW TRANSCRIPT

The brother of one of the suicide bombers in the Brussels terror attacks will compete in taekwondo at the 2016 Olympics.

Mourad Laachraoui won the European Taekwondo Championships on Thursday, which means he's headed to Rio de Janeiro this summer to compete for Belgium.

He beat 18-year-old Jesus Tortosa in a 6-3 match to claim the title in Montreux, Switzerland.

Shortly after it was revealed Mourad Laachraoui's brother, Najim Laachraoui, was involved in the attacks, the 21-year-old condemned his actions, saying he was "ashamed and sad" about what his brother had done.

"Our family has the same questions you all have," he said. "He used to be a nice intelligent guy. I couldn't believe it."

Najim Laachraoui was one of two men who carried out the bombings at Brussels airport on March 22. Thirty two people were killed in the attacks.

Najim Laachraoui's also been connected to the Paris terrorist attacks in November of last year, where over 130 people were killed.

Prosecutors say his DNA was found on a suicide vest and a piece of cloth at the Bataclan Concert Hall — the site were terrorists shot and killed 90 concertgoers. Belgian officials have said he was an expert bombmaker.

Mourad Laachraoui says his family hadn't had contact with Najim since he left for Syria in 2013.

Mourad Laachraoui told reporters he attempted to contact his brother once over Facebook to try to get him to come home, but he wasn't able to reach him.

This video includes a clip from RTL and images from Getty Images.