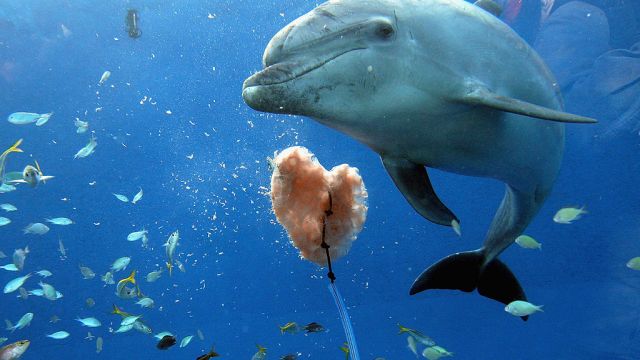 Baltimore's National Aquarium says it will move its bottlenose dolphins out of pools and into North America's first oceanside dolphin sanctuary by 2020.

Aquarium CEO John Racanelli told The Baltimore Sun: "We're developing a new approach to caring for dolphins by humans. ... We've learned so much in the 25 years that we've kept dolphins here that this is the right time."

The aquarium draws 1.3 million visitors a year but has faced pressure from conservationists and visitors to improve conditions for its animals.

In May, protesters called for the aquarium's eight dolphins to be released, holding signs that read "Captivity kills" and "Empty the tanks."

Experts say dolphins, like elephants and orca whales, require less restrictive accommodations than other wildlife because of their high intelligence and complex social instincts.

Colorado State University animal scientist Dr. Temple Grandin explains that unlike small fish, which can thrive in aquariums, dolphins suffer psychological damage when confined to unnatural habitats. This can lead to heightened aggression and bullying.

The aquarium is now seeking funding for an outdoor seawater sanctuary in a tropical climate similar to where dolphins roam in the wild.

Racanelli suggested the Florida Keys or the Caribbean as possible locations.

Aquarium officials say the ideal site will be larger than animals' current concrete amphitheater and will include natural stimuli like fish and marine plants.

In 2012, the aquarium replaced its stunt-filled dolphin shows with all-day access for visitors to watch the animals interact with one another and trainers.

In 2013, the facility launched BLUEprint, aimed at balancing the responsibility to rescue, protect and care for aquatic life with the goal of keeping audiences entertained.

SeaWorld theme parks and the Ringling Bros. and Barnum & Bailey Circus have also responded to recent backlash by changing how their star animals are treated.

Marine biologist Sylvia Earle said in the announcement, "The idea of providing sanctuaries for elephants, chimpanzees, big cats — and now dolphins — is a sign of a maturing ethic of caring unthinkable in past millenia, centuries and even decades."

This video includes clips from The Baltimore Sun and the National Aquarium and images from Getty Images.