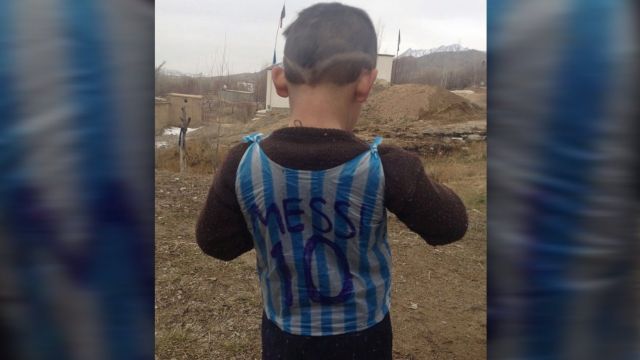 SMS
The Afghan Boy Who Made A Messi Jersey From Plastic May Meet His Hero
By Matt Moreno
By Matt Moreno
February 1, 2016
Twitter users went on a full-scale search for the boy when his photo hit the Internet. Now he's been found and will likely get to meet Lionel Messi.
SHOW TRANSCRIPT

He went from wearing a Lionel Messi jersey made of a plastic bag to maybe meeting the real-life soccer star in person.

The Internet went on a full-scale search to find the identity of the boy in this photo.

The search led them to the Jaghori district of Ghazni province in Afghanistan.

That's where 5-year-old Murtaza Ahmadi lives with his family. His family doesn't have the money for a jersey, so his brother made one out of a plastic bag. Murtaza is a huge fan of FC Barcelona/Argentina star Lionel Messi.

His father, Arif Ahmadi, told CNN, "When he suddenly wakes up in the middle of the night, he starts crying that he wants to go to Messi."

This is a popular unofficial Leo Messi fan account.