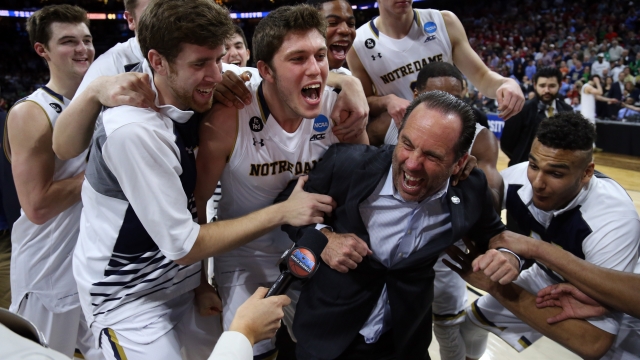 In another wild year of March Madness, here's one prediction that's guaranteed to come true: The ACC will be sticking around until the tournament's final game. That's how dominant the conference has been so far.

The ACC had a record six teams advance to the Sweet 16, and four of those teams moved on to the Elite Eight, matching the most all-time.

On top of that, all four ACC teams left are stuffed into the same side of the bracket. This means we're already guaranteed to see an ACC team in the championship game, even though it's three rounds away.

Keep in mind, there's more than just conference pride on the line. The NCAA gives monetary awards to conferences that do well in March Madness, and the ACC is due for an unprecedented payday.

ESPN's Darren Rovell says that payday is worth nearly $40 million, which is a record.

It's even more impressive when you consider Louisville, which finished fourth in the ACC this year. The Cardinals couldn't play in the tourney because of a self-imposed postseason ban.

Naturally, other conferences have had to step aside to make way for the ACC's dominance, especially the Pac-12.

The Conference of Champions fielded seven teams in the tournament, but all but Pac-12 champ Oregon fizzled out before reaching the Sweet 16.

To find the last time a conference sent four teams to the Elite Eight, you have to go back to 2009, in the days of the 16-team Big East. Though to be fair, only one of those teams is still in the conference, and two have since joined — you guessed it — the ACC.

This video includes clips from the University of North Carolina and Syracuse.com and images from Getty Images.