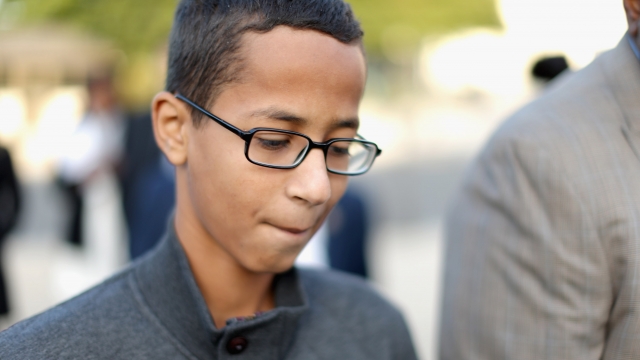 SMS
'Clock Kid' Ahmed Mohamed Sues School District For Rights Violations
By Grant Suneson
By Grant Suneson
August 9, 2016
Ahmed Mohamed, who was detained after a clock he made was mistaken for a bomb, is suing his school district for violating his rights in the arrest.
SHOW TRANSCRIPT

Ahmed Mohamed, the "clock kid" who was detained for bringing a project that was mistaken for a bomb to school, is taking his former school district to court.

The lawsuit says the Irving Independent School District violated Mohamed's rights when it detained him without allowing him to speak to a lawyer or parent.

The Mohamed family has since moved to Qatar, and Ahmed said in a press conference he can’t invent or build like he could in his workshop in Irving, Texas.

He said, "I never went out to buy things. I'd just build things. So when all my stuff got taken away it was put in storage, but most of it is gone in the trash."

Though Mohamed did get to meet President Barack Obama, he said the media attention became too much to deal with. The internet had plenty of conspiracy theories about possible ulterior motives, and some conservative media outlets even speculated that Mohamed and his family had ties to terrorism.

"They’re basically involved in civilization jihad" Jim Hanson of the Center for Security Policy said on The Blaze.

Mohamed's family previously said they would seek $15 million in damages, but now they say they'll leave that decision up to the jury.

This video includes clips from NBC, PBS and The Blaze and images from Getty Images.