Ted Cruz's Trump Snub: On Twitter Vs. On The Convention Floor 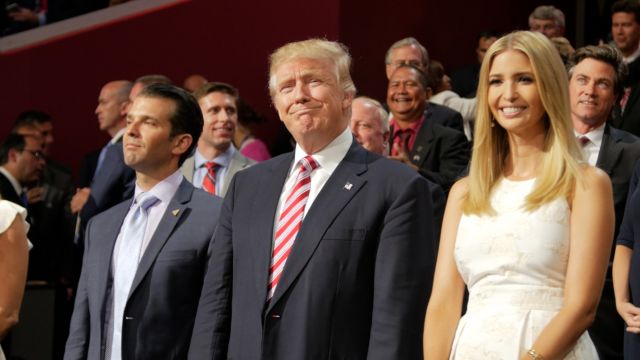 "Outraged delegates trying to shout down Ted Cruz as he fails to endorse Trump in his speech," a CNN anchor said.

I watched it on Twitter and on television, Kate Grumke watched it from about 200 feet away. What was that like?

Everybody was freaking out, everybody was yelling, but because I was in the middle of it, I couldn't really tell what people were saying or what was going on.

It was just chaos.

Yeah, so I know Ted Cruz said that people should vote their conscience.

"Vote your conscience. Vote for candidates up and down the ticket who you trust to defend our freedom and to be faithful to the Constitution," Ted Cruz said.

Hearing all these people booing, and then suddenly, I almost get trampled by a crush of people. And I look over, and they're running toward Donald Trump. And at this point, Ted Cruz is still talking, but it's like he did not exist. Nobody cared at all about what Ted Cruz was saying at that point. Everybody's just pushing into this whole mob trying to get over to Donald Trump to take a selfie.

"Shared values by standing for liberty. God bless each and every one of you," Ted Cruz said.

Again, as I consumed the speech mainly on Twitter, one thing that was pointed out widely was that 45 days ago, Donald Trump was insinuating that Ted Cruz's wife was ugly and his father helped kill JFK.

"His father was with Lee Harvey Oswald," Donald Trump said on Fox News.

And now, he's been offered a prime-time speaking slot.

Conventions are supposed to be one of the most predictable events that you cover as a reporter. You know generally what's going to be said; you know the message for the night. "Make America First" was the message for tonight. And this was a speech that I think caught some people by surprise. And it is kind of funny because, truly, there wasn't anything terribly shocking said. The most shocking thing that he said was "vote your conscience." He didn't go out there and bash Donald Trump. And yet, because these events are so conventional, for lack of a better word, and they are so predictable, just that in itself made news.

And he'll be officially nominated. We're going to see balloons dropping. I'm hoping to be on the floor for that.

It'll be fun. Hope you watch it with us.