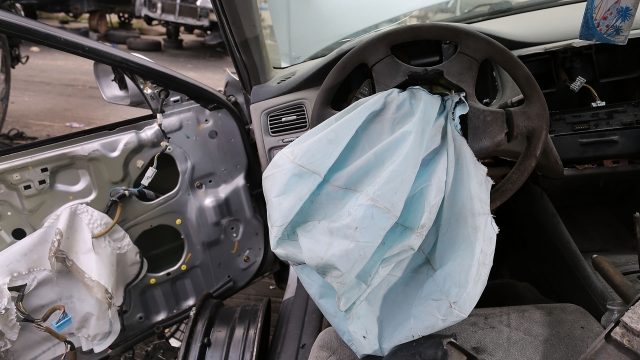 SMS
Takata Airbag Recall More Than Doubles In Size
By Grant Suneson
By Grant Suneson
May 4, 2016
Japanese auto parts maker Takata is facing another round of recalls for its airbags. The recall now affects more than 50 million vehicles overall.
SHOW TRANSCRIPT

The largest auto safety recall in U.S. history is now more than doubling in size.

Japanese auto parts manufacturer Takata has been ordered to recall between 35 million and 40 million airbag inflators through 2019. That’s in addition to the 28.8 million it was forced to pull last year.

Now, we’re learning that even without manufacturing defects, the propellant degrades over time, especially in warm, humid weather. That leads to the same issues as the defective models.

The faulty inflators are now estimated to impact nearly a quarter of U.S. vehicles. The NHTSA said the inflators have caused 10 deaths and over 100 injuries.

Takata was already fined $70 million for misleading the government about the inflators, and that fine could increase to a record $200 million if the NHTSA isn’t satisfied with its reforms.

NHTSA administrator Dr. Mark Rosekind recommends that anyone who’s received notice that their airbag could be defective should get it replaced immediately. You can find out if your car is affected at safercar.gov.