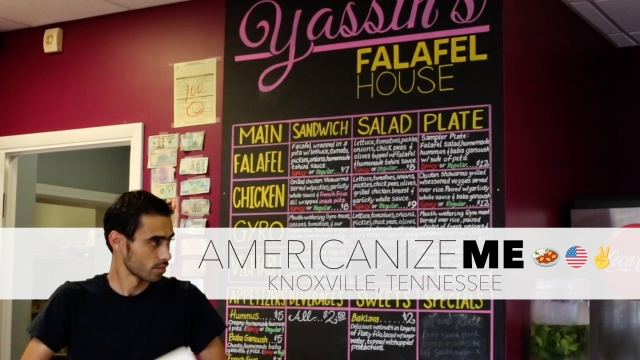 SMS
How A Syrian Man Used Food To Connect To His New Home In Tennessee
By Noor Tagouri
By Noor Tagouri
October 13, 2016
We're getting a taste of the melting pot and exploring the stories behind our multicultural food in the Newsy original series "Americanize Me."
SHOW TRANSCRIPT

In this episode of "Americanize Me," Newsy's Noor Tagouri went to Knoxville, Tennessee, to meet a Syrian who's using his falafel shop to connect with his community.

"My name is Yassin. I’m from Syria. City of Damascus. I'm from the area nearby what they call Medan. It's a very famous street where you can find a lot of good food and a lot of good sweets," said Yassin Terou, owner of Yassin's Falafel House.

Terou came to the U.S. in 2011 when the Syrian conflict began, and as the situation overseas worsened, his American dream began.

But the American dream doesn't come without challenges and persistence. Terou first turned to his local mosque.

And Friday Falafel at the mosque is how he got his start, and a tradition he still continues today.

It will take like 10 minutes to sell all the sandwiches we made, and then go back to work," said Terou. "When we start it, it was just two plastic tables. It's like nothing. Right here, you can't see anything. No kitchen even inside. I was making the food in one of my friend's restaurants."

Terou was bringing in a fusion taste of Syrian street food, catered to American taste buds.

"Our falafel is a mix of Palestinian and Syrian falafel," Terou said. "That's what makes our falafel different, and even the white sauce. The white sauce we use in the chicken shawarma is a mixed recipe of Syria, Spain and the United States."

And although he started at the Knoxville mosque, most of his customers now aren't even Muslim, but they do know him as their friendly Syrian refugee neighbor.

"The Muslim business owner, be proud of yourself," Terou said. "Don't be scared. People will still come to you. Everybody here, they know I'm Muslim, and even, I'm from Syria. Why is everyone scared of Syrian people? They know and they still come to us, they still send people to us, still love us. Give these people opportunity and I think it's only good for them and good for community and good for the future of this country with this mix of people from everywhere."

For more episodes of Newsy's "Americanize Me," check back every Thursday.