SXSW Apologizes For Asking Olympic Fencer To Remove Her Hijab 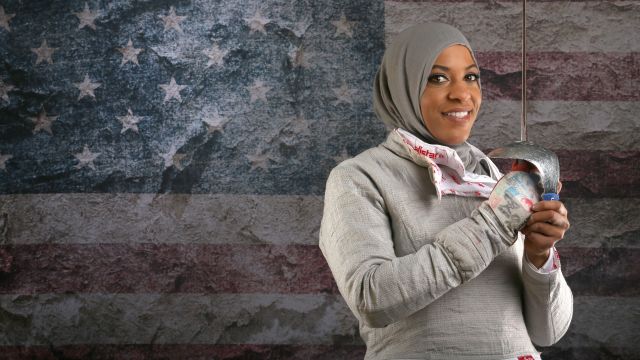 SMS
SXSW Apologizes For Asking Olympic Fencer To Remove Her Hijab
By Matt Moreno
By Matt Moreno
March 13, 2016
U.S. Olympic fencer Ibtihaj Muhammad says she was asked to remove her hijab by a SXSW staffer for an ID photo.
SHOW TRANSCRIPT

You'll almost never see her without a sabre in her hands and a hijab on her head, but U.S. Olympic fencer Ibtihaj Muhammad says she was recently asked to leave her hijab behind.

In a series of tweets Saturday, Muhammad says a South by Southwest employee asked her to remove her hijab for an ID photo. Muhammad says she was also given the wrong ID badge shortly thereafter.

Muhammad, who wears the hijab for religious purposes, will be the first U.S. Olympic athlete to wear a hijab during competition come the 2016 Summer Olympics. She's also the first Muslim woman to compete for the U.S. national team in fencing.

Muhammad was in attendance to speak at a SXSW presentation called "The New Church: Sport as Currency of American Life."

After her "crappy experience checking in," SXSW officials said they personally apologized to Muhammad and released a statement, saying:

"It is not our policy that a hijab or any religious head covering be removed in order to pick up a SXSW badge. This was one volunteer who made an insensitive request and that person has been removed for the duration of the event."

This video includes clips from the U.S. Department of State Bureau of International Information Programs, U.S. Embassy London and images from Getty Images.