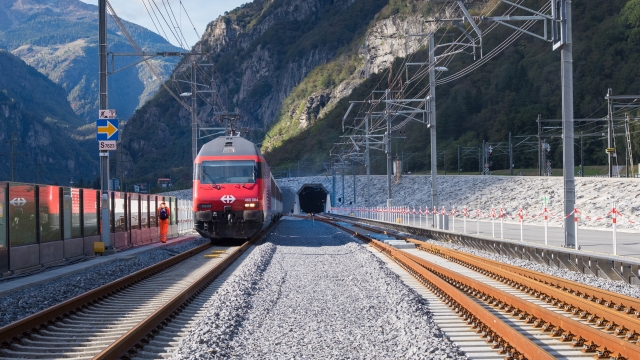 Which means the Gotthard Base Tunnel now beats the previous record-holder, the Seikan Tunnel in Japan, by more than 2 miles.

The Gotthard Base Tunnel cost more than $12 billion to build and was mainly funded by taxes, costing each Swiss taxpayer a little more than $1,000. And the celebration cost about $9 million.

The tunnel is meant to take the burden off a busy road where trucks crossing the Alps cause both pollution from exhaust and noise.

Yet, Swiss voters gave the go-ahead in February on a $2.8 billion project that will double the lanes of the road's tunnel. That project is controversial because the new train was meant to alleviate traffic on the road.

Still, advocates say despite the dire need for improvements to the road's tunnel, construction would be difficult to perform without doubling the lanes.

As for the Gotthard Base Tunnel, trains will open to the public in December and cut 45 minutes off the commute between Zurich and Lugano, Switzerland.

This video includes clips from AlpTransit, The Financial Times and Sakura Communication / CC BY 3.0, an image from Grzegorz Święch / CC BY 3.0 and music from APM Music.