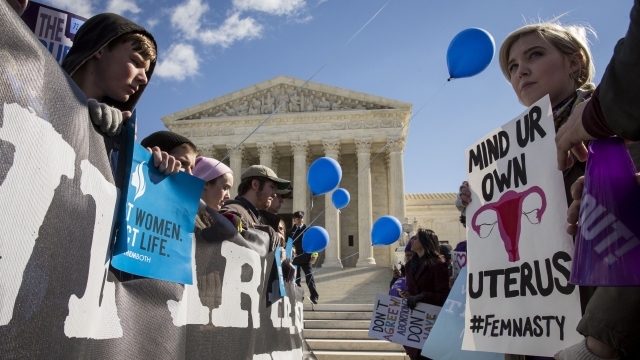 The question facing the court was whether Texas' requirements for abortion providers put an undue burden on women. The court voted 5-3 that the laws were too demanding in terms of difficulty and cost.

Texas' latest abortion laws — laid out in House Bill 2 — were passed in 2013 and set up two major conditions.

First, doctors who provided abortions had to get admitting privileges at hospitals near their clinics — basically paperwork that acknowledged the doctors had established a relationship with the hospital in case of an emergency.

But doctors have had a hard time getting these privileges. Many live too far from a qualifying hospital, or they haven't been able to commit the minimum number of patients. Some hospitals have even denied privileges based on religious affiliations.

Anti-abortion advocates have supported the measure because it forces abortion doctors to be vetted by peers.

But pro-abortion advocates have argued the measure isn't medically necessary because any person can be admitted into an emergency room and have called the measure an indirect way to prevent abortions.

Texas' laws also mandated abortions take place in what are known as ambulatory surgical centers. Some have argued the law leads to safer procedures, but others have noted clinics have struggled with the construction and equipment costs the centers require.

These costs have, in turn, been passed on to women seeking abortions. Roughly half of Texas' abortion clinics have shut down since the laws were enacted.

The New York Times notes women have had to wait longer to get appointments, and the further along they are in their pregnancy, the more expensive the procedure.

And 25 percent of the state's women (that's about 1.5 million people) would have to travel over 100 miles to a qualifying clinic.

Justice Anthony Kennedy was largely considered the swing vote. It was the first major abortion case for the Supreme Court in which three female justices voted.