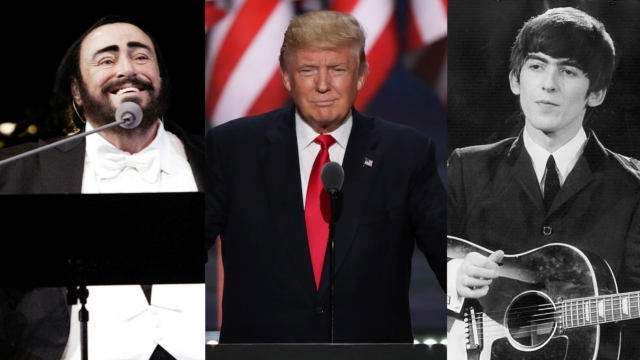 By Lauren Stephenson
July 23, 2016
Republicans seem to have a hard time finding music that artists will let them use at campaign events.
SHOW TRANSCRIPT

Thursday night after Ivanka Trump walked on stage to The Beatles' "Here Comes The Sun," George Harrison's estate tweeted, "The unauthorized use of #HereComesTheSun at the #RNCinCLE is offensive & against the wishes of the George Harrison estate." Harrison wrote the song.

The families and estates of George Harrison and opera singer Luciano Pavarotti are the latest to come out against the Trump campaign using their work.

According to NBC, Pavarotti's wife and daughters asked the campaign to quit playing an aria the tenor performed. They reportedly wrote in a letter, "the values of brotherhood and solidarity that Luciano Pavarotti upheld throughout his artistic career are incompatible with the world vision of the candidate Donald Trump."

Other artists, including Adele and The Rolling Stones, have also asked the campaign to stop using their work.

The Dropkick Murphys told Wisconsin Gov. Scott Walker "we literally hate you !!!" when he tried to use their music last year. Ouch.

In 2008, Heart told the McCain-Palin campaign to stop playing "Barracuda."

SEE MORE: Ted Cruz Is Not Winning Miss Congeniality At The RNC

Republicans seem to have a harder time finding music to play than Democrats. Before this latest round of objections, FiveThirtyEight reported there have been 30 instances of artists objecting to presidential candidates' use of their music since 1984 when Ronald Reagan used a Bruce Springsteen song. Only two involved Democrats.

As for whether any of these artists have a case in court, a copyright expert told NPR not really. But that's also not the point.

"The optics of it are so bad that there's really not much point in continuing to use a piece of music when the musicians really don't want you to," Sherwin Siy told NPR.