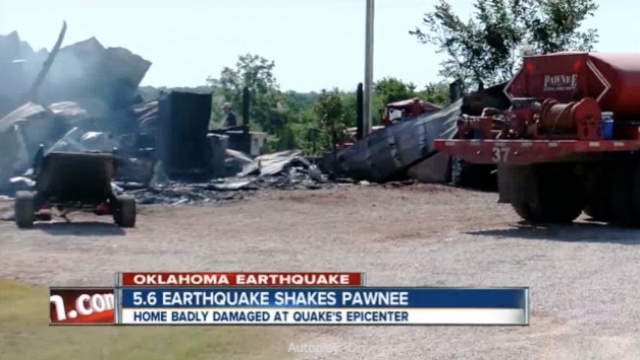 Oklahoma Gov. Mary Fallin declared a state of emergency as a result of the 5.6 magnitude earthquake that hit the state Saturday morning.

So far, the damage appears to be pretty minor. There was only one reported injury, and at least 14 buildings were damaged. But things could have been a lot worse.

Gov. Fallin said the emergency declaration "will start the process to helping individuals, families and businesses impacted by the earthquakes and serves as a precursor to requesting any necessary assistance.”

The earthquake's epicenter was near Pawnee, Oklahoma, but the effects were felt as far away as Chicago and San Antonio. Residents of states including North Dakota, Kansas, Arkansas and Missouri also felt the effects.

Earthquakes in that area of the U.S. have become alarmingly common as of late, and scientists think humans are to blame for the uptick in seismic activity.

Earlier this year, the U.S. Geological Survey made a map of places where oil drilling practices such as fracking and wastewater disposal can cause or at least contribute to man-made earthquakes.

After the earthquake hit, the Oklahoma Corporation Commission ordered each wastewater disposal well within a 500-mile radius to shut down. But that only affects 37 of the roughly 4,200 wells that operate in Oklahoma.

From 1973 to 2008, the central and eastern parts of the country averaged 21 earthquakes per year with a magnitude of at least 3. In 2014, there were 659 earthquakes of that magnitude or higher.

The state of emergency covers Pawnee County and is scheduled to last for 30 days.