Standing Desks Might Be More Trendy Than They Are Healthy 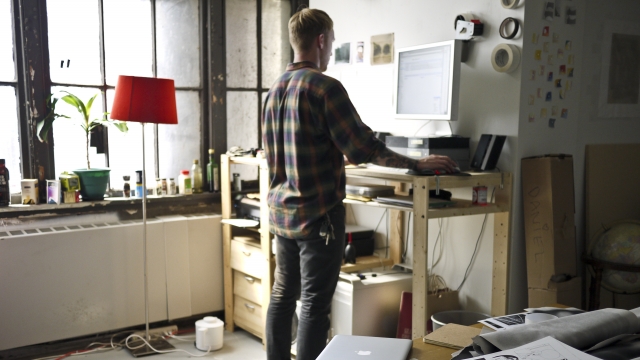 SMS
Standing Desks Might Be More Trendy Than They Are Healthy
By Samantha Crook
By Samantha Crook
March 18, 2016
Standing desk studies aren't designed well enough to tell if people are benefiting from the trendy workspaces, according to new analysis.
SHOW TRANSCRIPT

Take a seat, standing desk advocates: A new study says the desks might not be all they're hyped up to be.

"I would never wanna go back to just sitting at a regular desk in my life," a representative for The Human Solution said.

Researchers analyzed current studies on standing desks — along with active workstations like treadmill and pedaling desks— and determined they were insufficient in terms of sample size and long-term follow-up studies.

A researcher told NPR studies on sit-stand desks come to conflicting conclusions because the studies are poorly designed. He said: "What we actually found is that most of it is, very much, just fashionable and not proven good for your health."

"This is probably the least happy I've been in a long time," someone at Business Insider said while testing out a treadmill desk.

While some research on unconventional workstations has shown decreases in sit time in the first few months of use, it's still not clear if the benefits would actually improve someone's health in the long run.

This video includes an image from ramsey beyer / CC BY 2.0 and clips from The Human Solution, WABC, Humanscale, Business Insider and LifeSpan.