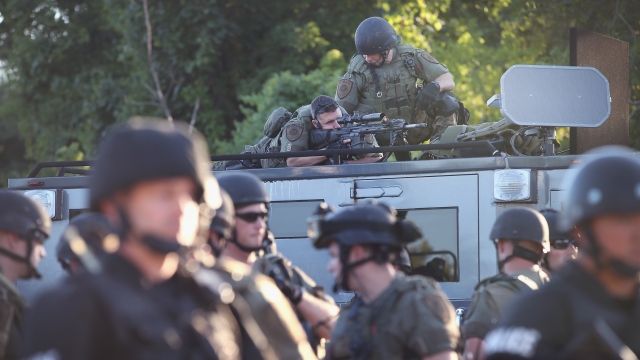 "We know we're not the military, and we don't want to put that image out there either," St. Louis County Police Department Sgt. John Wall said.

Unfortunately, that's how the world was introduced to the current St. Louis County Police Department after the unrest that followed the shooting of unarmed teen Michael Brown, which pushed the area into the national spotlight.

"Putting a guy on top of a truck with a rifle. Now, he's using the scope as a pair of binoculars, not as a riffle, to point at people or anything. That looked bad to the public. So we re-adjusted and put a guy out there with binoculars," Wall said.

"It's always a little difficult to look at your fault or things that you thought you were doing well that maybe other places in the country do things different," Wall said.

But it also found the department's officers didn't reflect the community they serve and that community policing was not a priority. That's where Sgt. Wall comes in.

"Prior to Aug. 9, 2014, we would tell you that we did a really good job with the community policing," Wall said.

He was picked to work with the Justice Department. He says the DOJ issued dozens of recommendations to the county police department, but community policing was his first priority.

"We reached out to different communities. We're doing way more community events. We're going to local churches, going to fraternal organizations. We've started a police athletic league. So we've really branched out all over the place. And officers now are getting thanked for what they do. And this never happened before," Wall said.

The department hopes this community outreach will also help with the department's diversity problem. Nearly 24 percent of St. Louis County residents are black, but the number of black officers sits at just 10 percent.

"We started a community recruiter program. What we've done with that is invite stakeholders and communities and told them the qualities and everything that we look for in a police officer. And now they recruit for us," Wall said.

As for if this method works, the county department is going to have to wait and see, but the latest class of officers for the county still doesn't reflect diversity in the community.

Sgt. Wall says one thing that hasn't changed and isn't really being worked on is the department ditching its military equipment — arguably one of the biggest asks by activists during the months after Brown's death.

"We made mistakes, and we learned from these mistakes," Wall said.

Wall says the DOJ's reform process is designed to be implemented in a two-year span — St. Louis County police will hit the two-year mark in October.