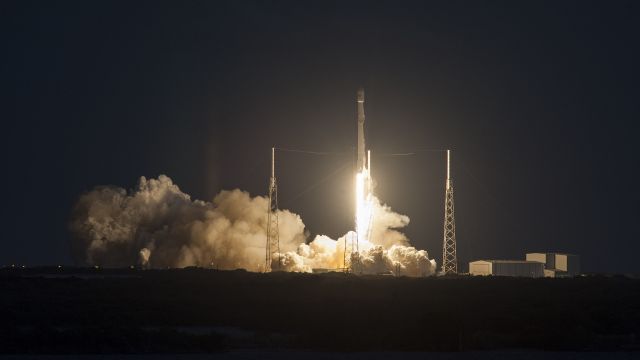 Space continues to be complicated as hell. After four aborted launches, SpaceX finally managed to successfully put a communications satellite into orbit. Unfortunately, the Falcon 9 rocket once again crashed into the floating barge it was supposed to land on.

SpaceX CEO Elon Musk isn't too broken up about the crash; he tweeted that the rocket's re-entry speed made a successful landing unlikely this time, but he's optimistic about the next launch.

The mission takes SpaceX one step closer to its goal of turning the Falcon 9 into a fully reusable rocket. It managed a successful ground landing in December, but landing on a tiny barge in the middle of the ocean has proved more taxing.

This is SpaceX's fourth failed barge landing, not counting the time a rocket blew up in midair after launch.

Friday's launch still counts as a success, though, because the company successfully deployed the SES-9 satellite it was carrying at about 25,000 miles above Earth. Previous Falcon 9 missions have stuck to low-Earth orbit at around 1,200 miles up.

SES has two more satellite launches scheduled with SpaceX this year. The company's next rocket launch, a resupply mission for the International Space Station, is expected to blast off in a few weeks.

This video includes clips from NASA and AllThingsD.