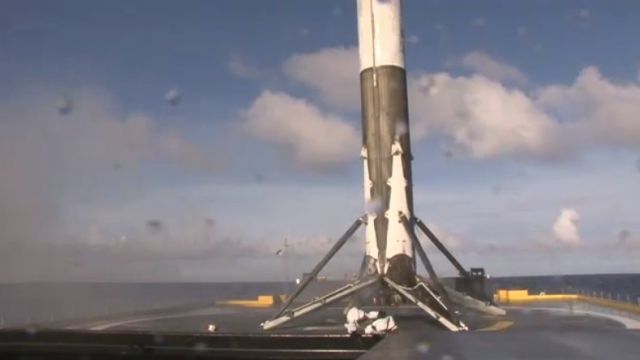 SMS
SpaceX's Water Landings Are Becoming Routine
By Matt Picht
By Matt Picht
May 27, 2016
This is the third time a Falcon 9 rocket has successfully landed on one of the company's barges.
SHOW TRANSCRIPT

Well, this is becoming a familiar sight. SpaceX has successfully landed one of its Falcon 9 rockets on a floating barge for the third time.

The rocket successfully boosted the Thaicom 8 communications satellite into orbit before maneuvering back to a remotely piloted landing pad in the Atlantic Ocean. Sticking the landing was a secondary goal for the Falcon 9, but an important one: The company's hoping to reuse its rocket boosters on future missions.

SpaceX hasn't actually relaunched a rocket yet. The company's CEO Elon Musk said one of the recovered rockets would be ready for a second launch in May or June, but nothing's been announced. One analyst told the Los Angeles Times that launch will likely be a test run rather than risking an expensive payload on a used rocket.

In the meantime, SpaceX is low on room to store these used rockets. After three sea landings and one ground landing, the company now has to house four rockets over 200 feet tall. The Verge reports SpaceX's current hangar can hold five, max.

And this latest rocket isn't home and dry just yet. Musk tweeted late Friday that the Falcon 9's landing damaged one of the rocket's systems, which means there's a small risk it could tip over and break during the recovery process.