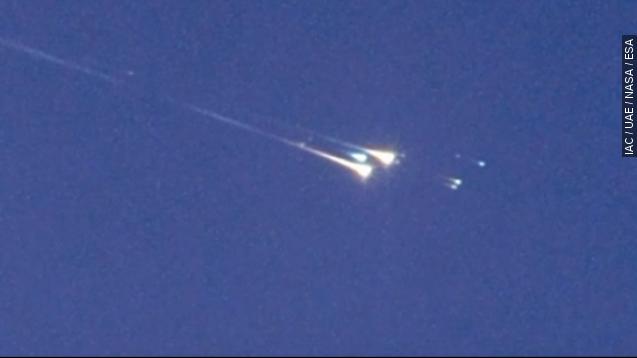 That piece of space trash that was headed to Earth safely re-entered the atmosphere Friday.

In October, NASA detected and named the space junk WT1190F. Yep, NASA has a sense of humor, folks. It's "most likely man-made space debris" from a previous mission.

Turns out orbital debris is actually a thing. As NASA points out, humans have been sending stuff to space for over 50 years, and most of that stuff falls back to Earth.

The objects either land or burn up, and some of them are just hanging out in the atmosphere. Most of the objects that do land end up in an ocean, since oceans make up most of the Earth's surface. This piece of junk entered the atmosphere above the Indian Ocean.

This particular object burned up. And it wasn't a threat to any of us earthlings. (Video via IAC/UAE/NASA/ESA)

What made WT1190F special, though, was the route it took to get here. It was entering the atmosphere at an angle similar to that of an asteroid. NASA said it was good practice for researchers on what to do if an asteroid was actually headed to Earth.