Someone Told Our Presidential Candidates About 'Pokémon Go' 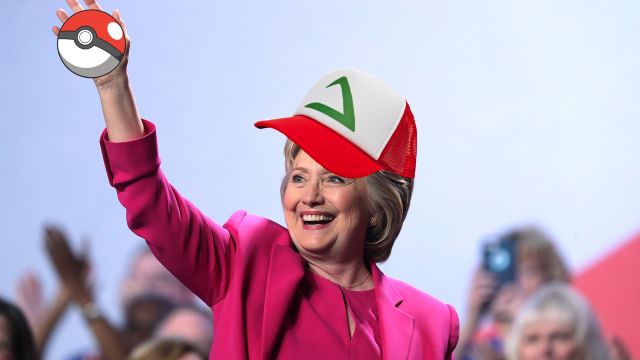 SMS
Someone Told Our Presidential Candidates About 'Pokémon Go'
By Matt Picht
By Matt Picht
July 14, 2016
Hillary Clinton and Donald Trump are both trying to ride the popularity of "Pokémon Go."
SHOW TRANSCRIPT

During a campaign rally, Hillary Clinton said: "I don't know who created 'Pokémon Go.' But I'm trying to figure out how we get them to have 'Pokémon Go' to the polls!"

The augmented reality game has been out for over a week now, and it's already become a political prop for both major presidential candidates.

Clinton's campaign is taking advantage of the app's ability to attract flocks of young potential voters by setting up voter registration drives near virtual Pokémon hotspots.

Donald Trump, on the other hand, has a "Pokémon Go" themed attack ad on Facebook. The faux battle music is a particularly nice touch.

As for Clinton's "Go to the polls" concept, Niantic is currently considering adding new PokéStops and Pokémon Gyms. Civic-minded trainers can visit the company's website to submit their local polling station.

This video includes images from Getty Images and clips from The Pokémon Company International. Music provided courtesy of APM Music.