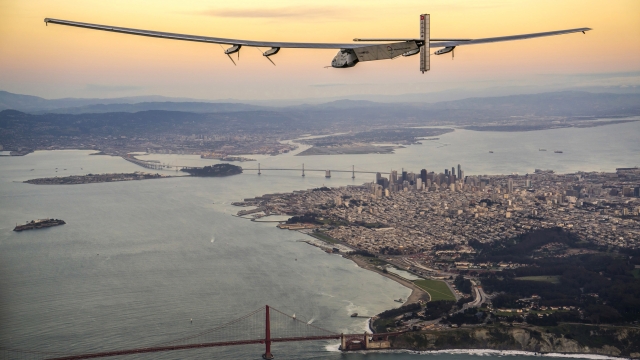 SMS
Solar Impulse 2 Completes 3-Day Flight Across Pacific Without Fuel
By Ryan Biek
By Ryan Biek
April 24, 2016
The solar-powered plane flew from Hawaii to San Francisco in one of the most dangerous parts of its journey.
SHOW TRANSCRIPT

A solar-powered plane completed its three-day flight across the Pacific Ocean without fuel Saturday.

The Solar Impulse 2 took off from Hawaii on Thursday and touched down in San Francisco just before midnight.

The flight was a demonstration for the solar-powered plane, which is said to weigh as little as an SUV.

Roughly 17,000 solar cells on the plane's wings fuel the propellers, and batteries are able to store energy to keep the plane flying at night.

However, the company says the plane cruises at speeds between only 30 and 60 mph.

The plane's two Swiss pilots started a trip around the world in March 2015. The leg over the Pacific Ocean was considered one of the riskiest parts of the journey.

The Solar Impulse 2 is scheduled to complete its 27,000 mile journey by late summer when it returns to the Middle East.

This video includes clips from Solar Impulse and images from Getty Images.