So Why Does The Indy 500 Winner Always Drink Milk? 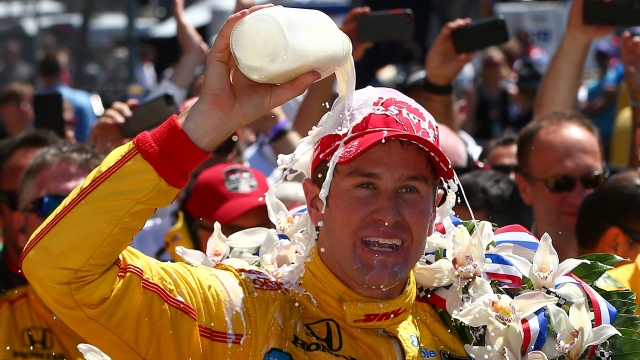 SMS
So Why Does The Indy 500 Winner Always Drink Milk?
By Carter Woodiel
By Carter Woodiel
May 28, 2016
You probably wouldn't choose to guzzle dairy right after hopping out of a race car. So why does every Indy 500 winner do it?
SHOW TRANSCRIPT

The 100th Indianapolis 500 is scheduled for Sunday, and though we don't know which driver will be taking the checkered flag, we know he or she will enjoy a bottle of milk at the finish line.

This may seem kind of weird, since milk probably isn't the first thing most folks would turn to when hopping out of a sweltering race car. But like most things at Indy, it's a tradition, and there's an interesting story behind it.

It all started when Louis Meyer cooled off with a glass of buttermilk after he won his third 500 in 1936. As the story goes, a dairy exec saw a picture of him in the paper and realized he was looking at a pretty big marketing opportunity.

Not all milk is created equal, though. Before the race, every Indy 500 driver lets race officials know whether they want whole, 2 percent or skim milk if they make it to victory lane.

This choice is important, since by now giving the milk a pass is not an option. Emerson Fittipaldi drank orange juice instead in 1993 and fans booed him at the track, though he did later take a swig of milk.

Downing a bottle of milk is just one of the traditions the race winner gets to take part in. The winner also gets his or her face in 3-D on the Borg-Warner Trophy, and gets a chance to kiss the 106-year-old bricks marking the finish line.

And fans get in on the traditions, too, including singing along to "Back Home Again in Indiana" right before the race starts.

Fans will also be able to take part in the milk tradition this year, with 100,000 bottles handed out for what the speedway is calling the largest milk toast ever.

So that's why the winner will be guzzling dairy on Sunday afternoon. And you won't find any drivers complaining about it.

"After 500 miles, you're really happy, you're celebrating, and you're kind of thirsty. That milk drinks awesome," three-time Indy 500 winner Hélio Castroneves said. "It tastes just like champagne."

This video includes images from Getty Images and clips from WRTV and Pennzoil.