Singer Changes 'O Canada' To Include 'All Lives Matter' Lyrics 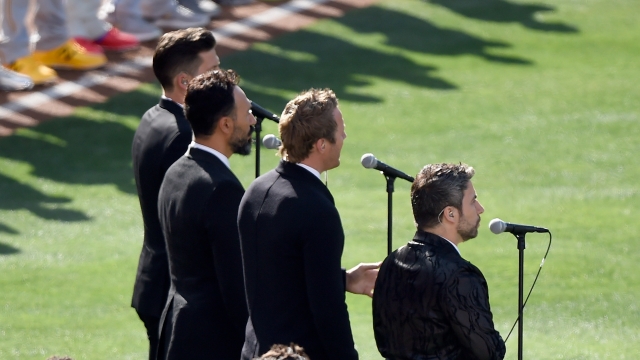 "We're all brothers and sisters," a Tenors member sang.

No, those aren't exactly the lyrics to "O Canada."

The Canadian Tenors are apologizing after one "lone wolf" member changed the lyrics of the country's national anthem to include lyrics about "All Lives Matter" during the MLB All-Star game.

The lyrics were supposed to be "With glowing hearts we see thee rise. The True North strong and free." Instead, the member sang, "We're all brothers and sisters. All lives matter to the great."

He also held up a handmade "All Lives Matter" sign.

The phrase is a response to the Black Lives Matter movement, which has called for greater attention across the nation on police officers' use of force against the black community.

Remigio Pereira, the Tenors member who sang the altered lyrics, defended his actions on Twitter, saying, "I've been so moved lately by the tragic loss of life and I hoped for a positive statement that would bring us ALL together. ONE LOVE."

Only viewers in Canada caught the lyrics change, as the moment wasn't televised live in the United States.

The group apologized for the incident after the game, saying in part, "We are deeply sorry for the disrespectful and misguided lack of judgment by one member of the group acting as a 'lone wolf' today. ... Our sincere apologies and regrets go out to everybody who witnessed this shameful act."

Pereira has reportedly been barred from performing with the group indefinitely.

This video includes clips from ABC and The Tenors, and images from Scazon / CC BY 2.0 and Getty Images.