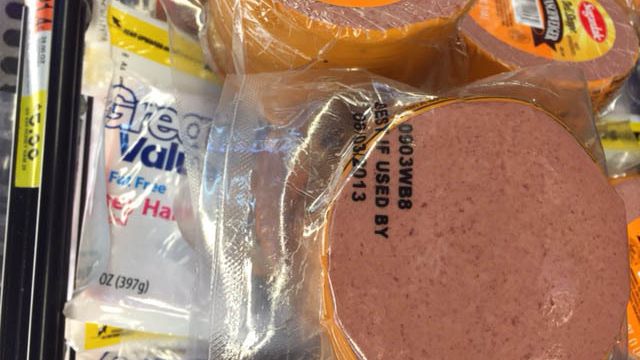 SMS
Shopper Finds Meat Marked As Best By 2013 At Ohio Wal-Mart
By Newsy Staff
By Newsy Staff
April 12, 2016
A shopper says he was buying goose liver at Wal-Mart for his dog when he came across several packages labeled "6/03/2013."
SHOW TRANSCRIPT

Goose liver marked as three years past its prime? Yeah, that didn't sound too appetizing to a man near Cleveland when he found several packages marked that way in a local Wal-Mart.

The man says he was buying goose liver for his dog when he came across the packages labeled "06/03/2013."

A spokesperson from Wal-Mart told Newsy's partners at WEWS that it was a simple human error at the supplier, and the meat wasn't actually that old. Still, that Wal-Mart reportedly threw the meat away.

Sugardale, the supplier of the meat, seconded that. They notified all affected stores to toss the meat, even though they believed the meat was still safe to eat.

This video includes a clip from Sugardale and an image from stu_spivack / CC BY SA 2.0.