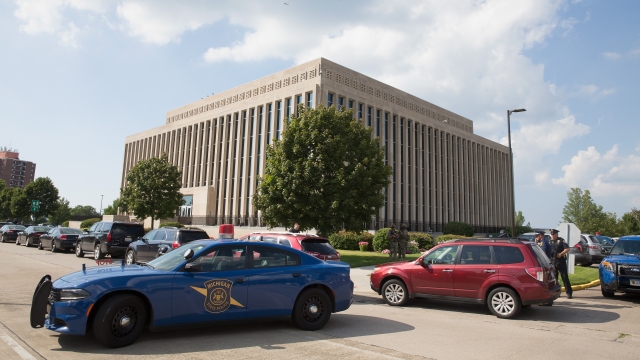 Local law enforcement and state police responded to a call at the Berrien County Courthouse in St. Joseph, Michigan, around 2:30 p.m. local time.

A sheriff confirmed to local news outlets that shots were fired as Larry Darnell Gordon was being transferred from a holding cell to a courtroom. He reportedly started fighting with the court officers, disarmed one of them and began shooting.

Other officers returned fire on Gordon, killing him. A civilian and a deputy were also injured, but both are in stable condition.

The two court officers killed have been identified as Joseph Zangaro and Ronald Kienzle. Zangaro was the head of security at the courthouse. Both men worked for other law enforcement agencies before serving the county for more than a decade.

"Our hearts are torn apart. They were our friends, they were my colleagues. I've known them for 30 years. So it's a sad day," Sheriff Paul Bailey said.

The courthouse was briefly placed on lock down and employees and civilians inside were questioned. Multiple state and local agencies are aiding in the investigation.

The courthouse shooting comes just days after police were targeted in a deadly shooting spree in Dallas, Texas. In the wake of losing five officers there, the city's mayor and police chief have called for unity.

This video includes clips from WDIV, WZZM, WXYZ and WFAA and images from Getty Images.