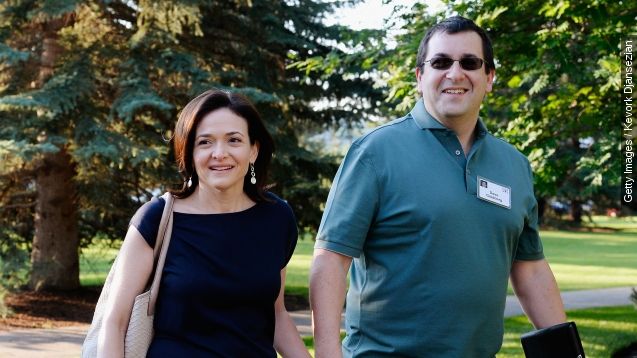 SMS
Sheryl Sandberg Says 'Lean In Circle' Helped Her After Husband's Death
By Samantha Crook
By Samantha Crook
December 30, 2015
The Facebook COO expressed gratitude for the friends who supported her after her husband, Dave Goldberg, died suddenly in May.
SHOW TRANSCRIPT

In the post, Sandberg expressed gratitude for the longtime friends who supported her after her husband, Dave Goldberg, died in May. (Video via LeanIn.org)

She wrote: "I believe deeply that everyone needs this kind of help and connection. ... For women, this kind of support can be especially important in navigating our lives and pursuing our ambitions."

She described her support in the context of a Lean In Circle. That's an initiative of the gender-equality organization she founded that prompts women to talk about issues of gender in an encouraging environment.

Sandberg said she hoped everyone could find a Circle in the coming year that "helps them build the life they want."

Goldberg was the the CEO of Survey Monkey and a founding board member of Lean In. He died suddenly after slipping and falling from a treadmill while vacationing in Mexico.