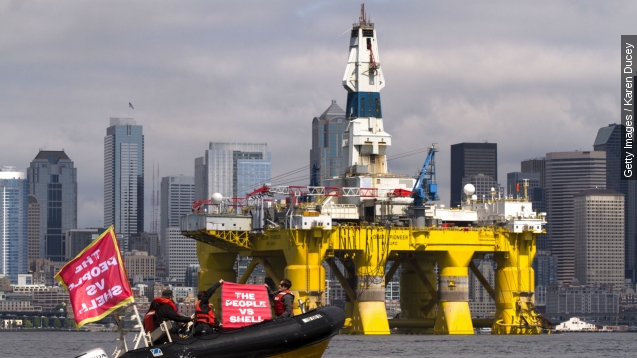 The Obama administration has given the final OK for Shell to drill deeper in the Arctic than it has in more than 20 years.

The holdup was due to a piece of equipment the feds wanted equipped on the wellheads called a capping stack; basically, it can shut down a well if a blowout happens. (Video via Shell)

With the capping stack in place, the director of the Bureau of Safety and Environmental Enforcement told The Hill the drilling is being held to the "highest safety, environmental protection and emergency response standards." (Video via Platts)

As you can guess, the news isn't going over well with environmental groups. The Sierra Club said President Obama is risking "his climate legacy," and allowing the permit "goes against science, the will of the people and common sense."

Greenpeace was a little more blunt, saying the administration "should know better than to bend over backwards to approve such a reckless plan."

The road to get the permit approved has been quite literally blocked by protesters. In Portland, Oregon, people rode kayaks and dangled from a bridge to stop a Shell ice-breaking ship from getting the capping stack to its destination. (Video via KOMO, MSNBC)

The president of Shell says it is more than prepared to deal with any potential disaster.

"We seriously just think about what's every possible thing that could go wrong, how do we mitigate that to keep it from ever going wrong?" Shell President Marvin Odum said.

Shell is allowed to drill until Sept. 28 when its permit expires.