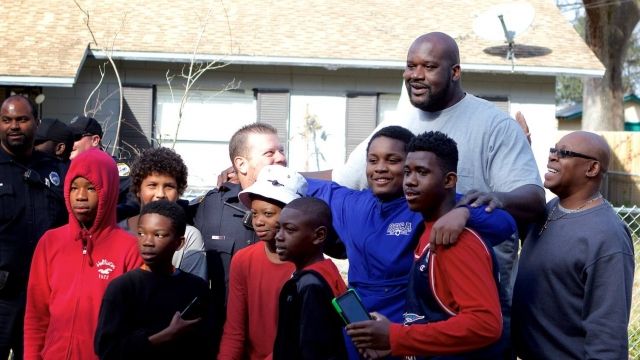 Remember when a police officer got a noise complaint about some kids playing basketball in the street, and instead of telling them off, jumps into the game — even lowering the rim to throw down a dunk. (Video via Gainesville Police Department)

Right at the end of the video he says he’ll be back again soon.

"I’ll try and get some backup, and we’ll get a little game going tomorrow," Officer Bobby White said.

Well, Officer White made good on his word, and let’s just say the "backup" he promised didn't need a lower rim. (Video via Gainesville Police Department)

NBA legend Shaquille O’Neal saw the video online and took a trip down to Gainesville, Florida, to surprise Officer White and the basketball-playing kids, and soon, the game was on.

O’Neal, who was a reserve police officer, wasn’t there to just show off his dazzling post moves. He also delivered some valuable advice to his young fans in the game.

"I will be a leader and not a follower," O’Neal said, with the kids repeating after him. "I will respect my peers, my elders and especially my parents."

Looks like a fun afternoon for all involved. Wonder how that neighbor feels.