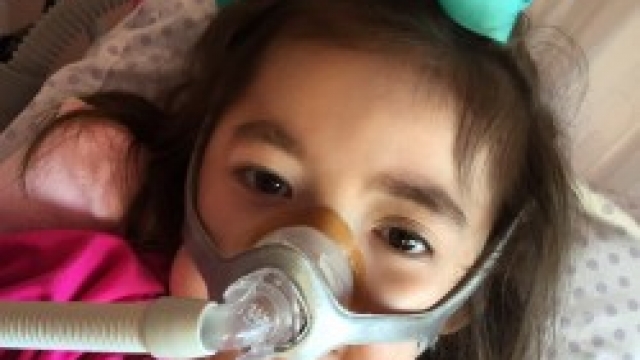 SMS
Severely Ill 5-Year-Old Who Said She Wanted To Go To Heaven Has Died
By Samantha Crook
By Samantha Crook
June 14, 2016
Some criticized Julianna Snow's parents, saying because she was so young, she didn't have the capacity to make a decision about her own death.
SHOW TRANSCRIPT

The 5-year-old whose parents agreed to her decision to die instead of receiving medical intervention died on Tuesday.

Julianna Snow had a severe neuromuscular disease called Charcot-Marie-Tooth. Last year, CNN reported doctors told her parents that if Julianna got sick again, her body wouldn't be strong enough to fight it off. They said medical intervention might not be able to save Julianna, but even if it did, it would leave her with very poor quality of life.

"She can't really barely move. So everything that she has in her mind she expresses to us, and she wants us to act it out," Julianna's mother told People.

Some criticized Julianna's parents, saying because she was so young, she didn't have the capacity to make a decision about her own death. But her parents say their daughter understood her decision to "go to heaven" and they had the support of medical professionals.

On Tuesday, her mother shared her thoughts about her daughter's death in a blog post, writing: "She fought hard to be here ... with a body that was too frail for this world. She was so brave — and I hated that she had to be so brave. This last fight was not to be won by her body. It was tired, and it needed to rest. And when it did, she was comfortable."

This video includes clips from CNN and KOIN.