Senator Manny Pacquiao Is Returning To The Boxing Ring 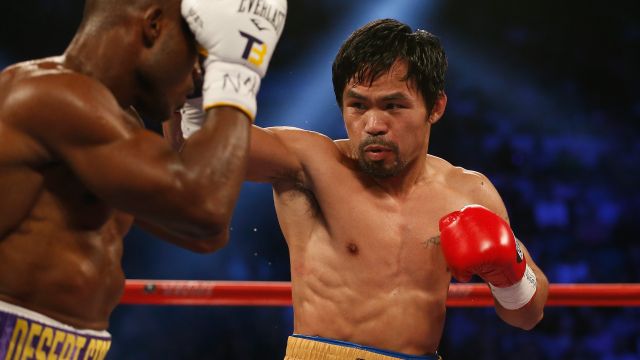 SMS
Senator Manny Pacquiao Is Returning To The Boxing Ring
By Matt Moreno
By Matt Moreno
July 13, 2016
According to promoter Bob Arum, Pacquiao — now a senator in the Philippines — will come out of retirement to fight sometime this fall.
SHOW TRANSCRIPT

A Filipino senator is heading back into the boxing ring.

Yes, we're talking about Manny Pacquiao. The decorated boxer is expected to come out of his short-lived retirement and fight as early as fall, according to promoter Bob Arum.

But scheduling a bout won't be quite as easy as it used to be. Pacquiao was elected to a senate seat in the Philippines in May, so he'll be juggling double duty if he does decide to return.

Arum told the Los Angeles Times, "He conferred with the president of the Philippines Senate, who gave him permission to fight, but [October] 15th was turned down because the senate needs to do the budget."

Pacquiao's return from retirement isn't totally shocking. It's kind of a thing in boxing to retire, then un-retire, then retire again, and so on.

We're not sure whom Sen. Pacquiao would be fighting in his return, but it's nearly impossible not to think of one potential name also rumored to be coming out of retirement.

Pacquiao lost to Floyd Mayweather Jr. in their first meetup last year, but he blamed his poor performance in part on a torn rotator cuff.

SEE MORE: Can We Call It A Comeback? Floyd Mayweather Files For '50' Trademarks

Mayweather, in April, said he was being offered upwards of nine figures to return. Could a "Fight of the Century" part two be on the horizon?

This video includes clips from Inquirer.net, GMA News, ABS-CBN and HBO, and images from Getty Images.